Video Games for Citizenship Education in a Digital Era 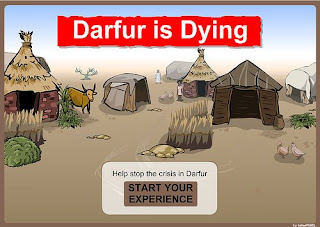 A growing number of today’s students are turning towards digital media to participate socially, economically and politically. W. Lance Bennett, in a study commissioned by the MacArthur Foundation on digital media and learning, entitled Changing Citizenship in the Digital Age (2008), describes how digital natives are using new technologies to impact their world. Using the Internet to access information, communicate, and organize, today’s youth have demonstrated the power of electronic technologies in making a difference. As evident in the 1999 protest of the WTO in Seattle, young activists are seizing these lines of communicate to arouse bottom-up civic participation. Bennett (2008) describes how many students disengage in traditional top-down politics. Moreover, these same students often find bottom-up politics more relevant and authentic (As evident in increased levels of student participation in volunteering, study abroad and community commitments). Favoring loose networks of community action, these students frequently turn towards electronic technologies like social networking sites to access and discuss economic, social and political issues.

Today’s digital natives are frequently turning towards electronic communications to learn about and discuss important issues. However, the infusion of these technologies inside the classroom has been lackluster at best. Particular, the area predicated on fostering strong and active democratic citizens, the social studies, has failed to make effective use of electronic technologies (Diem, 2004; Berson, 2005; VanFossen, 2008). There seems to be a mounting divide in the realities of how digital natives are using technology for informed and active democratic citizenship inside versus outside of the social studies classroom (See Maguth, 2008). Thus, the use of outdated mediums for civic education in the social studies results in young people finding them irrelevant and unauthentic. This reinforces a greater divide in teaching and learning. My dissertation research begins to examine this issue more in-depth.

With over 90% of students in a recent survey indicating they frequently play video games (Friedman, 2008), advocacy groups have been moving fast to construct video games for educative purposes. This has led to the creation of ‘serious games’. Serious games aim to teach students by realistically simulating some aspect of a given situation. Some examples include: business training games, flight or driving simulators, games that help patients understand how their bodies work, and games the allow players to navigate through and make decisions on a contemporary global issue. Serious games hold great promise in education because they allow users to test and experiment with systems, and develop a better understanding on relationships embedded in the system (See www.seriousgames.org )

-(Middle to High School) This is a free online single player game developed by the International Strategy for Disaster Reduction. Students navigate around a Sim like environment to make important decisions that involve saving lives and reducing the impacts of hazards resulting from natural disasters. Students are given a set amount of time (usually 10-15 minutes) to ready their city to confront five possible scenarios (Tsunami, Earthquake, Wildfire, Hurricane, and Flood). When students are done preparing their city, a news report breaks describing the aftermath. 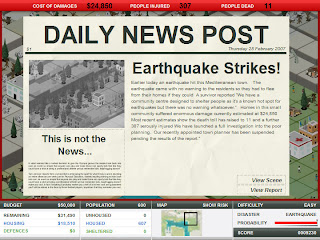 2. Darfur is Dying
-Developed through a partnership with Reebok Human Rights Foundation and the International Crisis Group, mtvU sponsored an unprecedented competition bringing together student technology and activism to stop the genocide in Darfur. The winning design produced Darfur is Dying. The game is a narrative-based simulation where the user, from the perspective of a displaced Darfurian, negotiates forces that threaten the survival of his or her refugee camp. It offers a glimpse into the horrors faced by more than 2.5 million internally displaced people by the crisis in Sudan.

4. Play Against All Odds
-Developed by the UN High Commissioner for Refugees, players take on the role of a citizen that is detained and forced to flee a repressive country. Set up in different acts, students must work to escape the country, try to establish refugee status in a host country, and strive to adjust to life in a new country. More of a documentary with interactive elements then a full blow interactive game, the game still provides wonderful visuals and context for the experiences of many displaced refugees.

- The first in a series of newsgames called The Arcade Wire, Airport Security offers a satirical critique of airport security practices circa early fall 2006, when security agencies in the US and abroad changed their policies to prohibit common items like toothpaste and hair gel. Getting the user to think through such questions as do knee-jerk reactions that limit our freedom of expression and travel make us safer? In The Arcade Wire: Airport Security you inspect each passenger and his luggage and remove the forbidden items before allowing the passenger to go through -- but the list of forbidden items changes on a moment-to-moment basis. Prohibited items may include pants, mouthwash, and hummus.

11. September 11th: Newsgaming
-More controversial due to its having users fire at possible terrorist targets, the simulation can be used to prompt a broad discussion on terrorism post 9/11. As students fire at potential terrorist threats, they’ll notice that the number of terrorists increase. This could prompt a further discussion into how violence perpetuates more violence, and the best means to win a war on terror.