Recently, President Obama signed into law the bipartisan legislation entitled Every Student Succeeds Act (ESSA). This legislation allows for more local control for states in the areas of goal setting, determine ratings, and deciding remedial measures.  Overall this legislation significantly scales back federal interventions in schools and prioritizes local control.  Rightly so, educators and parents are greatly relieved this legislation curtails an over-reliance on standardized testing and the use of these results to evaluate teachers and schools, which was narrowly prescribed in NCLB.  Local educators and stakeholders, or, those closest to students, are given the flexibility and authority to meet the needs of diverse learners. 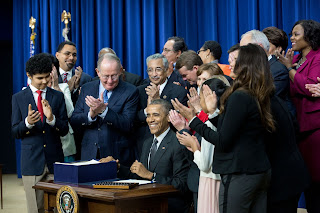 However, not as well publicized, is the deeply disturbing teacher preparation provisions that appear in ESSA. These issues have been highlighted by Valier Straus in the Washington Post (December 5th), and by Dr. Kenneth Zeichner at the University of Washington at Seattle. Faculty in university teacher preparation are left to wonder if the largest Pk-12 teacher unions, namely the National Education Association and the American Federation of Teachers, threw university teacher educators and their programs under the bus in order to get U.S. law makers to loosen restrictions on Pk-12 schools.
Provisions in ESSA permit states to allow a portion of their Title II funds to support venture capitalists in establishing teacher preparation academies. These “charter” teacher preparation academies would compete directly with university teacher preparation programs, all while exempting these same academies from national and state accreditation rules that regulate the quality and rigor of university teacher preparation.  Unlicensed academy teacher candidates would be fast-tracked into classrooms and serve as “teachers of record” without parent approval or their even being notified. Faculty that prepare academy teacher candidates are not be required to have advanced degrees, or, to engage in academic research on instructional best-practices (p. 114). Furthermore, teacher candidates that complete a program run by a non-university charter academy may be awarded a Certificate of Completion that may be recognized by states as “at least the equivalent of a Master’s Degree in education for the purposes of hiring, retention, compensation, and promotion in the state (p. 115).”


The federal government would never support medical preparation academies where non-credentialed and unlicensed doctors are thrown into operating rooms working with our nation’s most vulnerable patients.  As thoroughly reported in the news, Ohio’s Pk-12 charter school oversight and overall performance have been a embarrassment.  In light of ESSA, it looks like we can soon add “charter” teacher preparation academies to this cringe-worthy list.
Posted by Dr. Brad M. Maguth at 9:30 PM